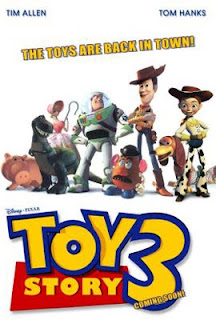 So as those of you who know me already know, I’m leaving my current job at the end of the month and I’m going to be spending the summer with my daughter. As such, my blog entries are likely to be even more infrequent (if that’s even possible), but thanks to a lot of movie theaters doing a free summer movie program for kids, you can expect a few ‘Way Too Late’ reviews of kids movies. And maybe a couple of newer ones as well, including the subject of today’s post of course. Father’s Day weekend was pretty hectic in the Cyberbeast house, what with my daughter being sick, but we did manage to make a trip to the theater and it was well worth it.

Toy Story 3 is all about what happens to toys when their owners grow up. Andy is 17 now and off to college, and the gang are worried about what will become of them. Will they be stored in the attic, or thrown away. At its heart, it’s a story about loyalty and friendship, and it delivers on an emotional level in a way that most live action dramas only wish they could. We all remember what it was like to be a kid and have an emotional attachment to your favorite toys, and the feeling of growing up and having to let go of that, even if in our hearts it’s not something that we really want to do.

Even after three turns, the basic premise of a world where all of our childhood toys could walk and talk whenever we weren’t looking still hasn’t gotten old. This time out the toys end up in a daycare center that at first seems like a paradise, but they soon discover is really a prison. They’re locked in the toddler room, to be battered and abused by kids that aren’t age-appropriate to play with them properly. Woody, ever loyal to Andy is trying to find his way back to his owner when he’s picked up by a little girl named Bonnie and taken home with her, where she plays with him along with her other toys. He eventually learns of his friends’ predicament and returns to the daycare center to break them out. The prison break sequence has some of the best, funniest parts of the movie, along with Bonnie’s play time. There’s something about those playing scenes with Bonnie, and the opening sequence with Andy, that just rings true of what a child’s imagination is really like.

The film is filled with so many great scenes, including the opening action scene which shows Andy playing with them from the perspective of his imagination. There are a lot of funny moments, a lot of great character stuff, and a lot of great performances from the cast of the first two movies, as well as newcomers to the cast Ned Beatty, Michael Keaton and Jeff Garlin. I know that a lot of people love making lists of their favorite Pixar movies, and arguing over which ones are better than others, but I think that Toy Story 3 is going to be at the top of those lists pretty consistently with very little argument. It’s not just a great kids movie, it’s a great movie.

My Netflix Rating: Five out of Five Stars
Posted by Cyberbeast at 3:24 PM