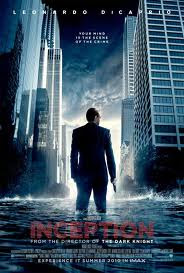 These days, I’m actually relieved when there’s a movie out that I want to see and my wife doesn’t. It’s much easier to find time to go to the movies by myself then it is to find a babysitter and plan a night out to see something together. So I lucked out with “Inception”, a movie that I’ve been excited to see since the first preview. In a weird coincidence, it has a lot of similarities with Leonardo Dicaprio’s film from earlier this year, “Shutter Island”. Both are reality bending journeys through the main character’s psyche, both characters lost their wives, and both movies challenge the viewer to figure out what’s real and what isn’t.

Leonardo Dicaprio plays Cobb, a thief who uses military technology to enter people’s dreams and steal their secrets. He’s on the run from the law, estranged from his children and accused of his wife’s murder. When he’s offered a dangerous job to plant an idea into a subject’s head rather than retrieve information, he puts a team together to do it. But he’s keeping a secret from the rest of his team, a representation of his dead wife is plaguing his subconscious and endangering the mission. He needs to face his demons in order to complete the mission and return to his children.

The dream world is obviously the most original and striking part of this movie, and the visuals are stunning. But the story more than carries its weight, it’s intricately woven as they cut back and forth between three different levels of the dream world. It all fits together like a beautiful puzzle. The performances are great, with emotional highs and lows that carry the viewer through the movie and make us care about the characters and their journey. One of if not the best movie that I’ve seen this year.

Four out of Five Stars
Posted by Cyberbeast at 2:58 PM