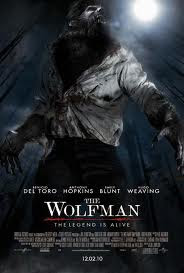 This is one of those rare occasions where I actually watched a Netflix movie the same day I got it and sent it back promptly the next day. Only because my wife wanted to see it too, otherwise I’m sure it would have sat half forgotten on a shelf for at least a month until I got around to it.

“The Wolfman” is the story of Lawrence Talbot, played by Benicio Del Toro, an American actor returning to his ancestral home in England when he learns that his brother is missing. When he arrives he finds his brother dead and tensions between him and his estranged father, played by Anthony Hopkins, to be high. His brother’s widow Gwen, played by Emily Blunt, is distraught and vulnerable and he begins to fall in love with her. But while investigating his brother’s death, he’s attacked by a creature, which he soon comes to realize was a werewolf. The authorities and townspeople are suspicious, and Talbot begins to suspect that his father knows more about what his happening then he is letting on.

I’ll start with the positives. Visually the movie is beautiful. The settings are dark and gothic, striking the perfect mood. And the special effects are quite good, particularly the transformation sequences, which is inevitably the heart of a good werewolf movie. And Hugo Weaving’s portrayal of the investigator trying to solve the case is excellent, sort of a ye olde Agent Smith. But the biggest drawback in the movie in my opinion is Del Toro, who just seems miscast in the lead role. Don’t get me wrong, I think he’s a great actor, but this part just doesn’t seem to fit him. Maybe there’s a parallel in showing him portraying Hamlet early in the movie, because he seems to carry a melancholy with him throughout the film. But his fury seems more sullen then angry. Maybe that’s intentional, but to me it just doesn’t feel like a lead performance. Anthony Hopkins is excellent in the role of the father, but the character is too subtle to say that he stole the movie. All in all, the pacing (especially in the first half) is slow, and the ending is unfulfilling.

My wife said that it was just ‘meh’, and that she’s glad that we didn’t pay to see it in the theater when it came out. However I think that this is a movie that benefits from the theater experience. The gothic settings and action sequences would probably work better on the big screen. But on one point we agree, and that’s on the ‘meh’ factor.

Three out of Five Stars
Posted by Cyberbeast at 6:21 AM